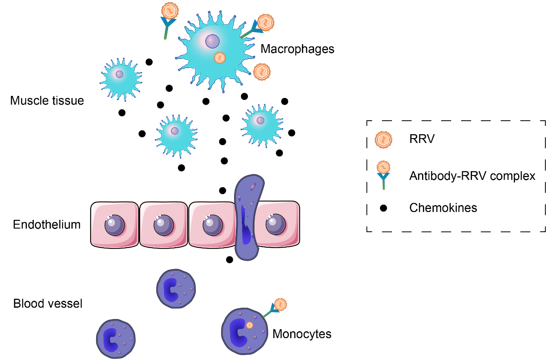 Figure 1. Proposed model for RRV mechanism of disease. When resident macrophages are infected with RRV, they secrete CCL2, CCL3 and CCL5. These chemokines mediate the migration of more macrophages to sites of inflammation, where they are susceptible to infection. RRV can also complex with specific antibodies and infect monocytes and macrophages by binding to Fc receptors on the surface of these cells. This leads to a further increase in the secretion of chemokines. Activated macrophages can also secrete factors that may damage tissues, such as reactive oxygen species and nitrogen intermediates.

RRV is classified as a biosafety level 2 pathogen. Viruses are rarely isolated from humans, probably because RRV does not persist beyond the early stages of the disease. Diagnosis is usually based on serology. Because IgM is produced early in Alphavirus infection and it does not usually persist in high titers, detection of IgM in acute-phase specimens can provide a presumptive diagnosis of recent infection. For HI detection, IgM needs to be isolated by sucrose gradient ultracentrifugation. In most laboratories, HI cannot distinguish between IgM and IgG. Enzyme-linked immunosorbent assay (ELISA) allows separate measurement of IgM and IgG, enabling presumptive diagnosis from a single IgM-positive sample.

The genome of the Ross River virus (prototype T48) is 11,851 nucleotides in length, flanked with a 5' cap and a 3'-PolyA tail. Structural proteins form the rest of the genome, encoding viral envelope glycoproteins and nucleocapsid proteins. E1 (hemagglutinin) assembles with E2 (neutralizing epitope) to form a surface heterodimer across the lipid bilayer. E1 also forms heterotrimers that assemble as hollow-base tripartite heads within the bilayer and are thought to be involved in membrane fusion. The third glycoprotein, E3, is not involved in virion structure. The 6K protein is involved in the formation of cation-selective ion channels in the lipid bilayer. The nonstructural proteins are encoded by the genes nsP1, nsP2, nsP3, and nsP4, which are post-translationally cleaved into two polyproteins.

Prevention of Ross River virus and many other alphavirus infections is solely based on general prevention of mosquito bites and cleanup of mosquito breeding sites, as there are currently neither approved therapies to treat nor approved vaccines to cure or prevent the Ross River virus infections in humans. Most of the world is currently experiencing the effects of climate change caused by human activity. Some scholars predict that the Ross River virus may spread around the world as an emerging infectious disease virus, so relevant antiviral research is imminent. Creative Diagnostics supports clients in Ross River virus antiviral research and development with extensive knowledge.