Zika virus (ZIKV) is a member of the Flaviviridae family. The primary mode of Zika virus transmission is through mosquito bites; however, the virus has also been demonstrated to be transmitted sexually, from mother to fetus, through blood transfusions, and through contact with contaminated bodily fluids such as saliva and urine. A recent Zika virus emergency was in 2015-2016 and resulted in an increased incidence of infant microcephaly and adult GBS. In response to the virus outbreak crisis, while studying the biology and pathogenesis of ZIKV and evaluating vaccines and treatments, researchers have developed a variety of animal models. The ZIKV (MR 766 strain) genome consists of a 10.8kb single-stranded positive-sense RNA molecule, including a 5' untranslated region (UTR) of about 100 nucleotides, a single open reading frame (ORF) of 10kb, and a 3' UTR of about 420 nucleotides. The ORF encodes a polyprotein precursor of 3423 amino acids, which is subsequently co-translationally and post-translationally cleaved into 3 structural proteins (C, prM, and E) and 8 non-structural proteins (NS1, NS2A, NS2B, NS3, S4A, 2K, NS4B, and NS5).

Zika virus preparations can be handled under biosafety level 2 precautions. Zika virus diagnostic tests may consist of molecular or serological assays. The former are direct analytical methods for detecting and/or quantifying genetic variation, i.e., they are based on the presence of viral nucleic acids in body fluids. In contrast, serological tests can be used to indirectly identify the previous circulating virus and measure a patient's immune response to the virus by detecting antibodies to the virus in serum. MAC-ELISA is a serological assay for the qualitative detection of IgM antibodies in serum or cerebrospinal fluid. Nonetheless, the results can be difficult to interpret due to the potential non-specific reactivity of antibodies. Therefore, tests determined to be positive, equivocal, or inconclusive should be confirmed by PRNT, a serological test based on the ability of specific antibodies present in a patient's serum to neutralize the virus by preventing plaque formation in the cell monolayer. PRNT is currently considered the "gold standard" for differential flavivirus serodiagnosis because of its high specificity. 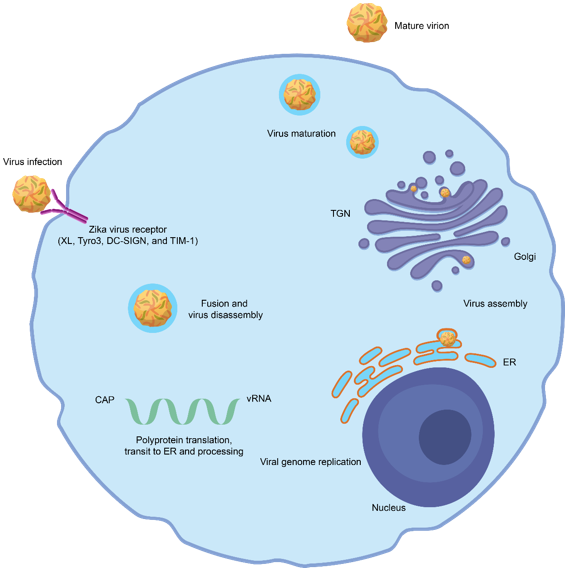 ZIKV is an encapsulated RNA virus that enters cells via receptor-mediated endocytosis. Then viruses fuse its membranes in endosomes by an acid-pH-triggered mechanism and via cell surface receptors such as XL, Tyro3, DC-SIGN, and TIM-1, thereby releasing viral RNA. The single-stranded RNA is then translated, and the resulting polyprotein is further cleaved into various structural and non-structural proteins (C, prM, E, and NS proteins). Replication occurs at the surface of the endoplasmic reticulum (ER). Transcription and replication of double-stranded DNA lead to the formation of new viral mRNA and single-stranded RNA, respectively. Viral assembly occurs on the endoplasmic reticulum membrane, resulting in the formation of immature virions, which are transported through the exocytic pathway. The prM protein is cleaved and the virus matures. Finally, the mature virus leaves the cell by exocytosis (Figure 1).

Over the past few years, researchers have put a lot of effort into developing vaccines and antiviral drugs to prevent or treat ZIKV infections. However, there are still no approved vaccines or drugs for this deadly pathogen. From testing specific drugs with known antiviral activity to testing libraries of hundreds or thousands of biologically active compounds, Creative Diagnostics has extensive knowledge to support clients in Zika virus antiviral research and development.